Vapor barriers are an important part of moisture control for interiors.  A vapor barrier is a material, typically a plastic or foil sheet, which resists the diffusion of moisture through ceiling, wall and floor assemblies of a building. Vapor-diffusion retarders are also effective for controlling moisture in basements, crawlspaces, and slab-on-grade foundations.

The term “vapor barrier” is commonly used, but “vapor-diffusion retarder” is probably more accurate, since “barrier” implies that the material will stop all moisture transfer, but this is not actually the case. Any material will allow the passage of at least a small degree of water vapor.

The capability of a given material to resist the diffusion of water vapor is measured by units called “perms,” which quantify its permeability.  A perm at 73.4° F (23° C) is a measure of the number of grains of water vapor passing through a square foot of material per hour at a differential vapor pressure equal to 1 inch of mercury (1-inch water column or WC).  Any material with a perm rating of less than 1 is considered a vapor retarder. 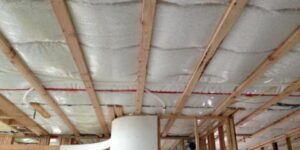